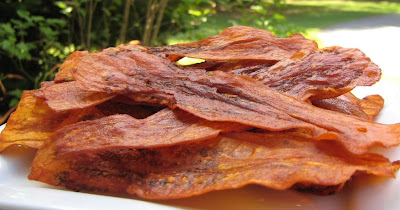 It seems like there are a lot of raw recipes for SAD foods. This may be because people want to find a raw substitute for their old favorite foods, especially comfort foods.

Some people don't mind this idea, especially while transitioning to a raw food diet. It does make it easier to have foods you are used to eating.

However, some raw foodies think you should not try to copy a SAD food, mainly because the results fall short of actually tasting like the food they are imitating. Also because it may be trying to re-create a food that you don't want to eat, like the "M" word. (meat, sssshhhhh)

With this in mind, I am still going to offer you several raw vegan bacon recipes...lol!

There are some really cute names that people have given their recipes, like bac-un, and fake-un. This is a fun idea, since it is not really bacon:)

I'll just refer to mine as bacon, but you gotta love mock meat names like sham ham, fakin’ bacon, not dogs and phoney baloney, right?

I know everyone has different tastes, so there are a few options, if you are craving something bacon-like.

Although there are actual recipes, I encourage you to mix and match the components and find your perfect bacon. Most recipes have just two parts, a base veggie for the bacon, with some kind of marinade. If you come up with your own recipe, and would like me to post it here, let me know!

For the bacon base there are several options. Here are some suggestions.
1. Eggplant, aka aubergine, I think is the most popular
2. Zucchini, aka courgette
3. Yellow summer squash
4. Jicama, if you can slice it really thin:)*
5. Young coconut strips, or coconut chips for bacon bits

*To slice the base veggie used for the bacon, I love to use my electric food slicer. This is the one I have, pictured below.
JCPenney has several models, and they are sometimes on sale.
A mandoline will work, but if you have a very large veggie it may be difficult to slice.
I find the electric slicer to be faster and safer than the mandoline.
If you make raw veggie lasagna, veggie chips, ravioli, manicotti, or bacon, you will find it very useful.

I find the thinnest possible slices of jicama to be my favorite.
You don't have to slice squash paper thin because it shrinks so much, and may be too thin after drying.
Eggplant works well sliced a little thicker than a nickel, and looks the most like real bacon. I love making the eggplant bacon:)

For a bit of sweetness you can try agave, dates, honey, or maple syrup.

There is often some kind of vinegar, with the most popular eggplant bacon recipe using ume plum vinegar. You may want to check the nutrition facts for the plum vinegar, especially if you are watching your sodium, as it has 1050mg per teaspoon.
Apple cider vinegar is a common ingredient most raw foodies have on hand.
Nama Shoyu is also popular for raw bacon.

Another ingredient necessary for creating an authentic bacon is oil or some kind of fat. Any mild oil, or olive oil, or even an avocado should give you a bacon-esque texture:)

For the smokey flavor, there aren't any raw options, so you may choose to leave these out. Smoked paprika, liquid smoke, chipotle pepper, smoked salt, smoked black pepper, and Lapsang Souchong tea. I find a little goes a long way with these ingredients, and they do give an authentic smoked bacon flavor to the finished product:)

Now for the recipes! There are many online, which I will provide the links to. One simple BLT recipe just used long strips of dulse as the bacon:) I hope you find one you like. Please let me know if there is another raw bacon recipe you would like to see here. Also, if your recipe is posted here, but you would like it removed, just let me know:)

Most of the following recipes are for eggplant bacon.

Bacon, Why Not posted on from sad to raw website

My own recipe is posted on gone raw, of course:)

Here it is with some slight modifications 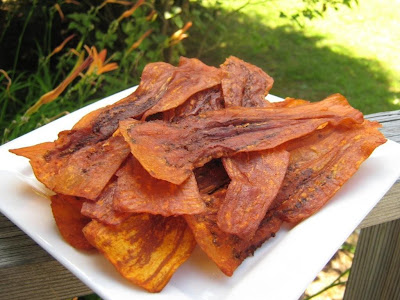 *I split the wide end of the eggplant an inch or so vertically in the middle and overlapped it to create straight slices (after marinating), or trim the eggplant to a rectangular shape before slicing, as pictured. Trimmings can be chopped for bacon bits. Peeling the eggplant is up to you. You can slice the eggplant into rounds if you prefer, like eggplant bacon chips:) 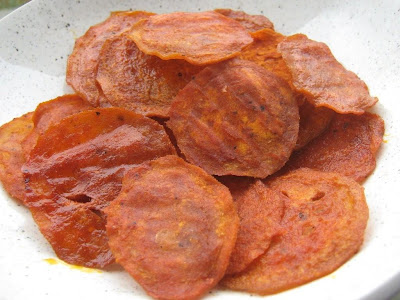 1. Mix all ingredients, except eggplant.

2. Lay the slices out on parchment paper.

3. Brush one side of the sliced eggplant lightly with mixture, add water to mix as needed. I use my fingers or a pastry brush. Turn each slice over, and brush the other side. The eggplant will become soft and if you like you can shape it to resemble real bacon:)

4. Transfer with the parchment to mesh dehydrator sheets.

5. Dehydrate at 115 degrees till crisp, flipping and transferring to mesh sheets 1/2 way through. Mine took about 12 hours as they were very thin.

Store in glass jars 2 weeks. If they wilt, you may re-crisp in dehydrator about 1 hour.

Adjust all ingredients to your own taste. Quantities also vary according to the size of your eggplant, and how thinly it is sliced. I use organic eggplant, which is usually a bit smaller than conventional.

Here are a few pics of makin' the bac'un! 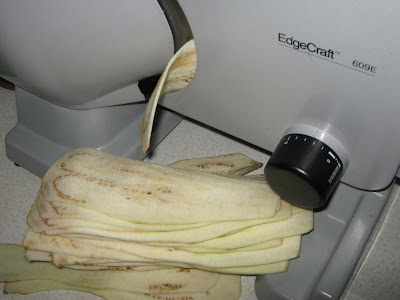 Laid out on parchment 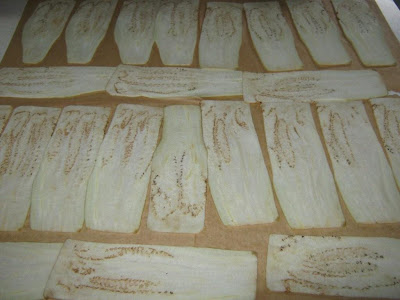 Brushing with the marinade 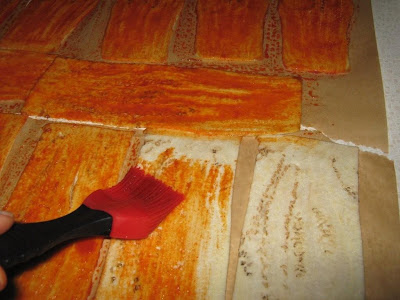 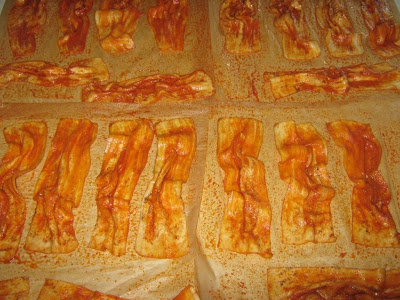 Here are a few pics of things you can make with the bacon:

One of my favorite ways to eat the bacon, a BLT salad 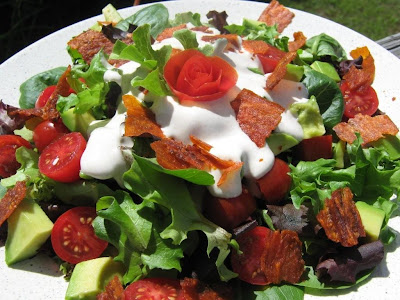 A BLT with sprouts on an ezekiel tortilla 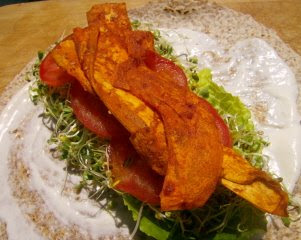 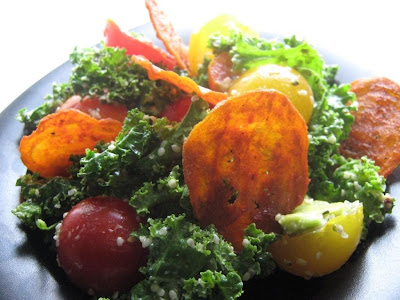 `````````````````````````````````
The following recipe was my very first bacon. It was one of those happy accidents:) I was trying to make a BBQ "potato" chip, and was using jicama for the chip. This is the recipe I was rawifying. After tasting it, I realized it tasted quite bacon-like, and so my bacon recipe was born! I must admit at the time I was transitioning, and had some in a BLT on real toast with some vegenaise..hehe. 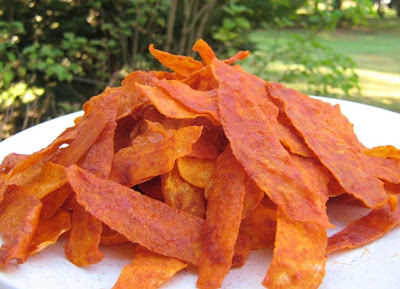 1. Lay jicama out on parchment paper.

2. Coat both sides of jicama with a marinade. If making bacon bits, just mix the marinade with the jicama and spread onto parchment.

3. Dehydrate until crisp, flipping and transferring to mesh sheets 1/2 way through. The jicama may take up to 24 hours to get really crispy.

Here is the jicama as Canadian style bacon..sorry for the old pic:) 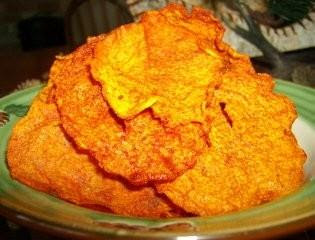 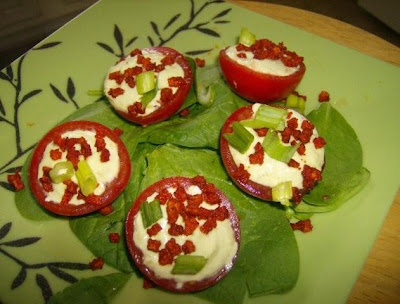 I hope you find this collection of raw vegan bacon recipes helpful. It does make a unique addition to the raw food diet:)
Posted by evergreen at 10:23 AM

wow... I never felt bacon was something that was missing in my life, but THIS looks awesome!! Will have to try it :)

Hi Joanna!...This is a fun recipe to play around with:)

i just made some eggplant bacon too! mine was a lot less red. i think it's because i couldn't find the paprika. still tasted good though.

is that a meat slicer you have there? what kind of machine did you slice it with?

Sometimes the smoked paprika is called Spanish pimentón. There is a sweet or hot variety, but I have only tried the sweet:)

I just edited my post to include a link for the slicer. I love it, and use it at least once a week:) I can't be trusted with a mandoline!

OMG! Made these over the weekend and sooo impressed. Linked up to your post! You did a fantastic job with this! I'm going to make more today...we have a ton of eggplant. I'm also planning to make the Caponata - and I may or may not make the tartlets- just depends on time! :) I LOVE your blog. Thank you for sharing!

Thanks so much for your lovely comment, La Mama Naturale'! **blush**

The bacon and the caponata are my two favorite ways to eat raw eggplant:)

Bacon has been one of things i have missed the most since converting to a raw food diet, this is perfect, thank you so much!

How do you long term store this once prepared? Thanks!

Hi The Sanctuary~ As long as they are very dry and crisp, the veggie bacon keeps well in glass jars for several weeks. If needed they may be warmed and crisped up in the dehydrator for an hour or so. For longer storage, you may want to keep them well wrapped in the fridge or freezer, and warmed before enjoying:)

I'm going to make these tomorrow! I've never made vegan bacon before. Very exciting! Thanks!

can you use any other oil like olive oil in place of sunflower oil?

Yes, you can certainly use any other oil, it is used more for texture than taste in this recipe.

I just prefer sunflower oil because it is very light and neutral tasting.

Thanks for stopping by, hope this helps :)

I love how you're whispering and sneaking around this recipe. Raw foodies can be so militant sometimes huh? lol Thanks for the post. Believe it or not, you're helping us cookies make better choices in life. I'm just a raw food enthusiast who's severly addicted to regular food but knows i should switch but hasn't found a way to. maybe my next life lol N

Hi I know this is an old post but I just found it...
What a GREAT Idea !!! Where have I been ???
Can one use zucchini for this ?
Just a thought with the massive bounties we always have every year !!!
Thanks for the recipe.
Patti

Hi Patti...Yes, the zucchini works very well for this recipe. Since it has a high water content, I like to slice it a little thicker because it shrinks a lot when dehydrated. Thanks for your question, hope this helps! 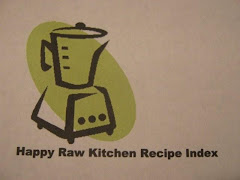 know what you eat

what is in your cosmetics?

just a word about the links here

I just wanted to let everyone know that all the links found within this blog are simply sites I have used or come across in my web travels. They are provided only as a resource:) 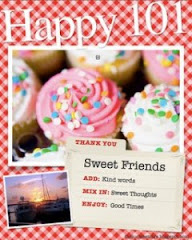 Thanks so much to Pam, Fayinagirl, Joanna, Marlie, Julia, Christopher, and Melissa 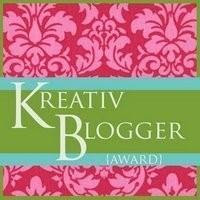 evergreen
Welcome, everyone! My name is Angela, and in February 2007, I discovered the benefits of raw food. Since then, I have enjoyed the challenge of creating healthy, delicious meals using fresh vegan ingredients. Thank you for joining me here!